After a brief hiatus due to some health issues, I'm getting back into the development of my IG army.  I'll have some pictures to post soon, but I've been working with green stuff and resin molds to create some unique looks for my troops.

I also picked up some Dark Eldar recently, but I'm not planning to do any crazy mods on them for the time being.

Back to work and then building tonight!
Posted by Nebcron at 12:27 PM 2 comments:

I've finished the building phase on a handful of models thus far.  Most of what I've done has been armor, with a handful of soldiers either close to done or halfway there.

Not a lot of customization on the armor right now.  I have some mesh netting and other materials I plan to use on the painting phase to give them more character, but the basic shape of them is standard Leman Russ, Chimera and Basilisk. 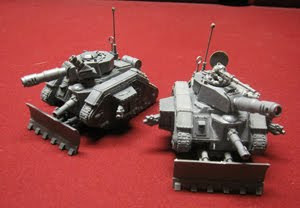 The tank gunner on the right has no head currently, I've promised him one by the end of the weekend though.  I've messed around a bit with the placement of his turret gun.  I know...daring. 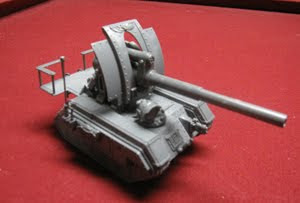 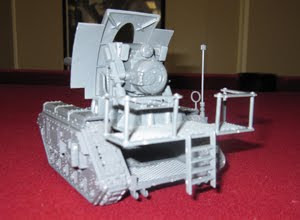 Here's my Basilisk.  Standard design here.  I'm making some custom sandbags for it to pile on the upper platform.  The commander with his binoculars will be up there and I have a second soldier who will kneel by the cannon hatch, presumably his job is the loader.  In the lower compartment I'm planning to put some spare munitions.  Working on sculpting those at the moment. 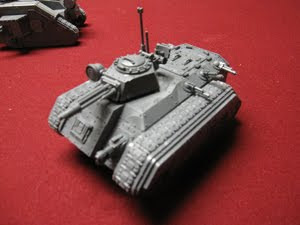 My Chimera.  Not entirely sure what I'm going to do with this one yet. 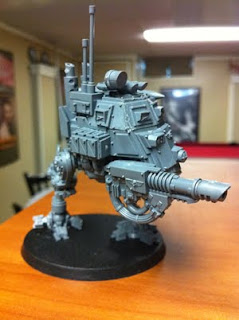 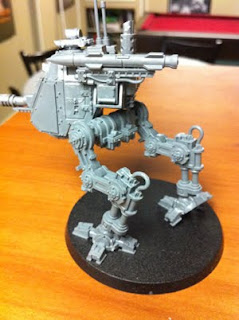 I'm pretty proud of this little guy.  I gave him a walking motion by trimming and re-gluing a couple of the toes.  I also gave him a slight head turn and tilt as if he's sniffing out a target. 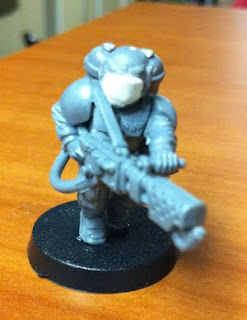 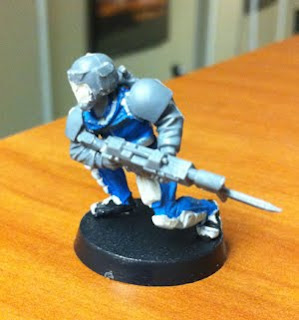 A couple of Tullon Irregulars here.  The guy with the flamer is Private Sujohn.  I need to file down his mask and shape it a bit.  The second guy here is Private Tipp.  I have an old collection of Heroclix and I've been sacrificing them to the will of the Emperor.  I used one here, Bonecrusher I believe it was, to give Tipp the look of running down a target.

All of the models need filler for their gaps and some touch ups in the shaping department.  I really only have the troops left at this point.  I'm hoping to have built most, if not all of them by the end of the weekend.

Feel free to comment, I'd love to hear thoughts and ideas!
Posted by Nebcron at 10:40 AM No comments:

I recently got into Warhammer 40k, and by recently I mean the last two weeks.

It started when I walked into a store called Pandemonium (www.pandemonium-online.com) Yeah, I plug places, but only ones that I really like.  I went into the store to ask about a zombie survival game and ended up walking out with a Warhammer 40k rulebook and Imperial Guard codex.

I chose the IG mainly for their look.  Growing up, Aliens was a major influence on my young mind and the vehicles & soldiers of the IG brought back many fond memories of the Colonial Marines, doomed as they were.  Poor Hudson.  Game over, indeed.

This blog will serve a few purposes for me.  First, it will give me a chance to lay out the history of my IG regiment, which I have dubbed the 481st Tullon Irregulars.  Tullon being the home world they came from. I plan on a few stories here and there about their world and why these guys are who they are.  Second, I'll be posting images from my conversions and paint jobs here.  I've never been one who is satisfied with the cookie cutter out of the box look for anything.  Not to say there's anything wrong with it, or with you if you do prefer it, it's just  that I really like the extra flavor and diversity changing things up provides.  40k seems to offer a great deal in that arena, so it's no wonder I've quickly become addicted.  Thirdly, since each of my soldiers will be unique, I am giving them all names and over the course of my future gaming, I'll tell stories about these guys and the wars they are fighting.  Every now and then, I'll also post random tidbits about whatever tickles my fancy.

What I won't be posting?  Lists or tactics.  I currently don't know jack about playing the game, so there's no point in me prattling on about what a bolt gun does.  And even after I know what I'm doing, I just don't believe that what works for me will necessarily work for you or anyone else.  In a game decided by dice rolls, anything can happen, and probably will.

I'll be working on the look of the site and try to get some pics up of the first few models I've started to put together.  Feel free to comment and follow along!

Nebcron
Metro Detroit, Michigan
I'm a 35 year old gaming nut and avid storyteller. I work in graphic design currently, so I get a lot of time to play with fun design programs. I play a lot on Xbox, so if you end up following things here and want to add me, I'll provide you with my gamertag.